After initial delays due to the ongoing pandemic, Round Records and the Jerry Garcia Family will join Record Store Day on September 26th in celebrating independently owned record stores within our communities with a first ever vinyl re-issue of The Very Best of Jerry Garcia, a greatest hits compilation spanning 5 LPs. The September 26th date is the second of a new three date “RSD Drops” series from Record Store Day with other new releases hitting record shops on August 29th and October 24th. This special collection salutes one of the most legendary figures in American music, reaching outside the realm of the Grateful Dead through Jerry’s broad array of folk, bluegrass blues, and roots rock side projects that enriched his storied career. His solo albums capture the heart and soul as well as the rich talents of his incomparable genius.

The first two LPs spanning 1972 though 1982, pulls highlights from all five of Jerry’s studio releases: Garcia, Compliments, Reflections, Cats Under the Stars, and Run for the Roses. Studio classics include the iconic Jerry Garcia and Robert Hunter compositions “Deal,” “Sugaree,” “Might As Well,” “Mission in the Rain,” and “Rubin and Cherise.” The remaining three LPs boast more than 76 minutes of rare live gems from a range of acoustic and electric performances between 1973 and 1990. Other live highlights include the Jerry Garcia Band’s interpretations of Jimmy Cliff’s “The Harder They Come” and Bob Dylan’s “Positively 4th Street.”

The Very Best of Jerry Garcia will be re-issued on Record Store Day as a 5xLP 180g vinyl clamshell box set with a special etching featured on Side J. The 5xLP set is pressed in a limited edition of 4,000 pieces and includes a free MP3 download of the album. For more information on Record Store Day and a list of participating local, independent record stores visit RecordStoreDay.com.

“Mission In The Rain”

“Run For The Roses” 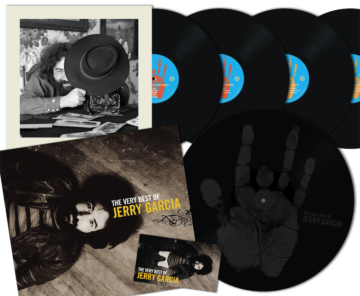