We’re excited to unveil “Stella Blue,” a new portrait by AJ Masthay published as a 6-color limited edition letterpress print. Each print measures 16″ x 20″ and is signed & numbered by the artist in an edition of 500. “Stella Blue” will be released via Garcia Family Provisions on January 5th.

A message from the artist:

My motivation in creating this new Jerry Garcia portrait was to capture not only the man but also a distinctive era, specifically 1974. No one could sing from their soul quite like Jerry especially on a tune like “Stella Blue.” My visual representation of soulful Jerry finds him in mid crescendo surrounded by all the cues of the era, none more iconic than Wolf and of course the Wall of Sound.

As with last year’s “Palm Sunday”, I once again chose letterpress as the medium of choice for “Stella Blue”. Six hand drawn separations were created to make up the main image with an additional touch of bright red in Wolf’s tongue applied by hand to each print. The Jerry handprint emboss was brought back to add that extra touch, making these prints something really special. — AJ Masthay 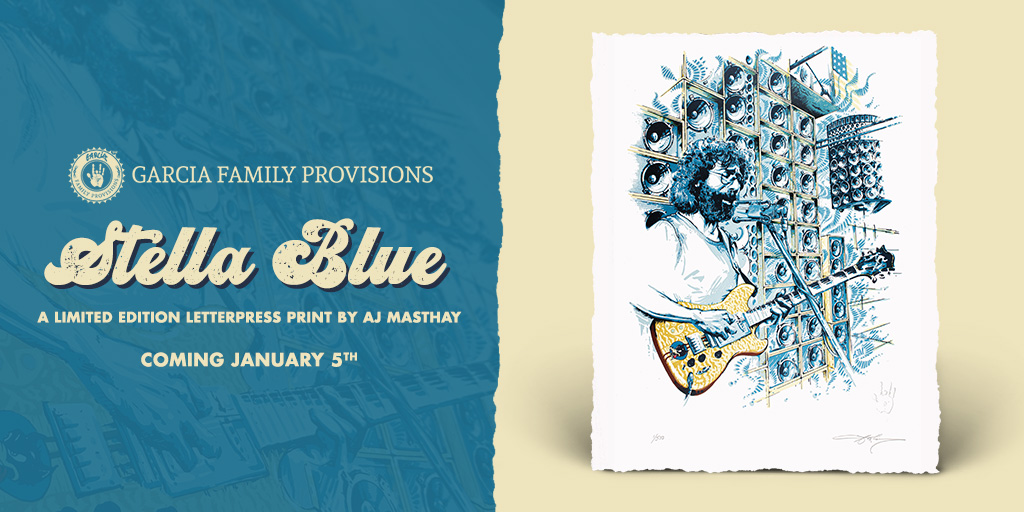