Side Trips: Volume One Coming To Vinyl For Record Store Day 2017

Round Records will re-issue Jerry Garcia and Howard Wales’s Side Trips: Volume One on vinyl as a Record Store Day exclusive release on November 24th.  In addition to the vinyl release, Side Trips: Volume One will also be released as a digital download and available on streaming services for the first time.  Originally released on CD in 1998, Side Trips: Volume One presents over an hour of exploratory improvisations culled from one of the legendary Monday night jam sessions at the Matrix in San Francisco during 1970 with bassist John Kahn and drummer Bill Vitt, who also anchored Garcia/Wales lone studio effort, Hooteroll?.  Garcia held Wales’s influence in high regard stating, “Howard did more for my ears than anybody I ever played with because he was so extended and so different.”

Howard expanded on the jam sessions upon the album’s original release:
“Back in 1970 I was asked to put a Monday night jam together down at the Matrix, a club on Fillmore Street in San Francisco. So I invited Jerry down to play, as well as Bill Vitt and John Kahn.

I put this thing together so that we could jam down there as well as with other people that came in. Many local musicians would show up and play with me on jam nights at the Matrix. We worked it into a beautiful scene. People came down, really enjoyed themselves and played a lot of really good music. It was a very free environment, capturing many great musical moments that have stood the test of time.”  Howard Wales – 1998

The Record Store Day edition of Side Trips: Volume One is a 2-LP set pressed to 180gram vinyl by MPO with gatefold packaging in a limited edition of 2,500.  Side Trips: Volume One will also be made available for download and streaming for the first time ever.  For more information on Record Store Day and a list of local, independent record stores where the release will be available, visit RecordStoreDay.com. 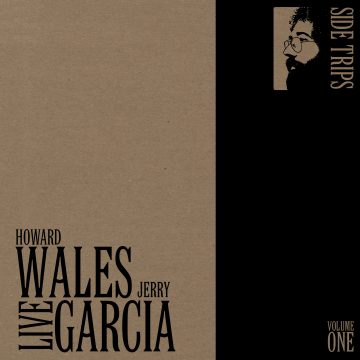