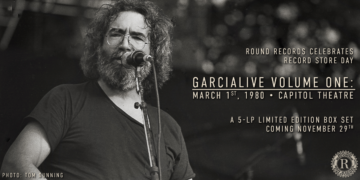 Shake it on down to your favorite locally owned, independent record shop on November 29th for Record Store Day’s Black Friday event and pick-up a copy of GarciaLive Volume One: March 1st, 1980 Capitol Theatre — pressed to vinyl for the very first time.  The 5-LP collection is pressed on to 180gram vinyl in a limited edition of 5,000 individually numbered, foil-stamped boxed sets.  Each set includes a unique download card unlocking a MP3 download of the mastered album audio.

Originally released in 2013 and remixed from the original 24-track recordings, the first installment in the GarciaLive series chronicles the Jerry Garcia Band’s complete performance at the historic Capitol Theatre in Passaic, New Jersey on the tail end of a particularly incendiary three-week east coast run.  Garcia and his band, comprised of John Kahn on bass, Ozzie Ahlers on keys, and Johnny d’Foncesca on drums, performed an early and late show on this evening, with the latter featuring an appearance from Garcia’s songwriting partner Robert Hunter on “Tiger Rose” and “Promontory Rider.”

As David Gans states in the liner notes, “It’s hard to imagine a more diverse musical mind than that of Jerry Garcia” and this release is a testament to that notion. Show highlights include the early show opening “Sugaree,” the Jimmie Rodgers penned rave-up, “That’s All Right,” and a rollicking version of “That’s What Love Will Make You Do,” among others, which show the Jerry Garcia Band loose and fluid at the end of the tour.

For more information on Record Store Day and a list of local, independent record stores where the release will be available, visit RecordStoreDay.com.

How Sweet It Is (To Be Loved By You)

Mission in the Rain

That’s What Love Will Make You Do

The Harder They Come