We’re excited to announce the debut of On Broadway, a new archival series celebrating Jerry’s magical 13 night run at the historic Lunt-Fontanne Theatre in New York City’s Broadway theater district. The first installment, On Broadway: Act One – October 28th, 1987, will arrive June 23rd on Round Records as a 3CD set or digital download and is currently available for pre-order in the Official Garcia Store.

“The (two) Garcia Bands’ – Jerry Garcia Acoustic Band, and the electric JGB – 1987 run on Broadway from October 15th through Halloween was destined to be memorable for many reasons,” as Dennis McNally states in the liner note essay. There’s record setting ticket sale figures, a destiny tied to Jerry’s namesake (Broadway composer Jerome Kern) and of course the sheer visual oddity that is Deadheads descending upon The Great White Way, but what shines brightest is Garcia’s jovial and relaxed mood which sets the stage for the inspiring performances contained within the release. The below excerpt from McNally’s liner notes sums up the magic contained within the collection perfectly:

“The electric JGB was its usual solid self, ripping up Jerry’s customary mix of Dylan (note especially Melvin’s gorgeous, outstanding synthesizer work on “Knockin’ on Heaven’s Door”), reggae (Peter Tosh’s “Stop That Train”), Motown (Marvin Gaye’s [well, Holland-Dozier-Holland’s] “How Sweet It Is”), and Los Lobos’s “Evangeline.” The most interesting original here is the not-so-commonly sung “Gomorrah,” which Garcia simply nails.

But it was the acoustic band that was unusual in this context, and it’s worth some particular attention. There are bluegrass songs – the Stanley Brothers’ “If I Lose,” among others – folk songs – Libba Cotten’s “Oh Babe It Ain’t No Lie” – and country songs like the Tex Logan-arranged “Diamond Joe” or Mel Tillis and Webb Pierce’s “I Ain’t Never,” which has a Garcia/Nelson vocal duet that sounds just like the Everly Brothers. The material was classy and fun and in some odd way just exactly right for Broadway.”

As with our GarciaLive series, On Broadway: Act One will be available as a 3-CD set or as Digital Downloads in 256kbps MP3, 44.1khz/16bit FLAC or 88.2khz/24bit FLAC format. Pre-order your copy today. 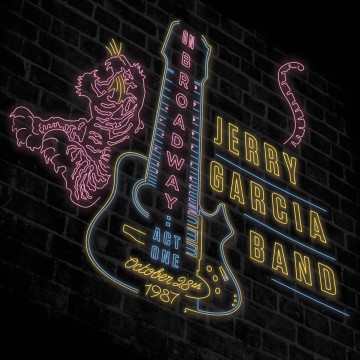