We were truly blown away by all the excitement around Electric on the Eel: August 10th, 1991 during Record Store Day in April. Round Records is delighted to announce the release of a new pressing on August 2nd! Unlike the Record Store Day version, the 4-LP 180gm set is pressed in an open edition and presented with a new blue and orange color scheme on the packaging while still featuring an etching derived from Thos Chapman’s original show poster on Side H and an MP3 download of the mastered audio. Ahead of its August 2nd release date, Electric on the Eel: August 10th, 1991 is now available for pre-order at Garcia Family Provisions.

The August 10th, 1991 performance stands out as one of the finest shows within the later-era of the Jerry Garcia Band and was the last of the three beloved biannual performances at French’s Camp on the Eel River in Piercy, CA. The events were co-presented by Bill Graham Productions and the Hog Farm which, as producer and Hog Framer Bob Barsotti describes “lent them an air of familiarity not always present in the urban setting in which Jerry usually played.” The audience and band both delighted in the free-spirited and fun-filled atmosphere, setting the stage for magical sets of music featuring the quintessential JGB line-up: Garcia (guitar and vocals), John Kahn (bass), Melvin Seals (organ), David Kemper (drums), Gloria Jones (vocals) and Jacklyn LaBranch (vocals).

The setlist is as unique as the venue and uncharacteristically dotted with rarities including The Band’s “Twilight,” Johnny Mercer & Hoagy Carmichael’s “Lazy Bones,” and Eric Clapton’s “See What Love Can Do.” Buoyant versions of “Lay Down Sally,” and an epic, set-closing “Everybody Needs Somebody to Love” closes the band’s run at Eel River on an especially high note.

The Way You Do the Things You Do

And It Stoned Me

Waiting for a Miracle

My Sisters and Brothers

See What Love Can Do

Everybody Needs Somebody to Love 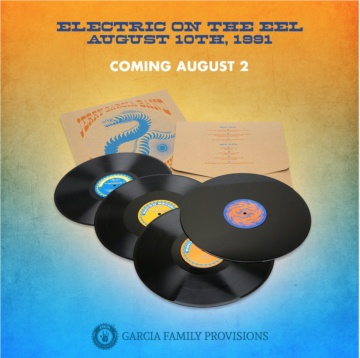