Like A Road Leading Home: Celebrating Jerry Garcia at The Warfield on Jan. 11th and 12th!

From the JGB’s first show at the venue in 1981 to the legendary record number of performances in the late 80’s and 90’s to Jerry’s personal dressing room backstage, the walls of Bill Graham’s Warfield Theatre in San Francisco are filled with countless memories of Jerry’s music and spirit.

To continue that legacy, the ‘Jerry Garcia Birthday Band’ lineup from Red Rocks ’17 and Vail this past summer will return to the stage once more this January at the familiar confines of 982 Market Street for Like A Road Leading Home: Celebrating Jerry Garcia on January 11th and 12th! This past August’s 2 night run at Mighty High in Vail, CO was an unforgettable musical experience so we’re excited to bring the music of the JGB back home to the Warfield for these two shows with original JGB members Melvin Seals, Jacklyn LaBranch, and Gloria Jones along with Oteil Burbridge, Tom Hamilton, and Duane Trucks.

A limited number of pre-sale tickets will be available beginning tomorrow, Wednesday, Nov. 7th, 10am PST at jerrygarciafanticketing.shop.ticketstoday.com while the general on-sale begins at 10am PST on Friday, Nov. 9th. 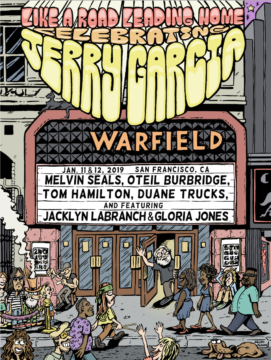