Jubilee: A Celebration of Jerry Garcia set for March 30th at the Ace Hotel Theatre in Los Angeles

The Jerry Garcia Family, The Bluegrass Situation and Goldenvoice are proud to announce JUBILEE: A CELEBRATION OF JERRY GARCIA, to take place on Friday, March 30 at The Theatre at Ace Hotel in downtown Los Angeles. The event continues a year of commemorations surrounding Garcia’s 75th birthday.

The event and accompanying silent auction will benefit three Garcia Family selected charities: the Rex Foundation, the Jerry Garcia Foundation, and the Center for Biological Diversity.

Tickets go on sale to the public on Friday, February 23 via AXS at 10am PST. Special presale tickets will be available here starting Thursday, February 22 from 10am – 10pm Pacific Standard Time. VIP packages will also be available.

“This is an evening to celebrate the life and legend of Jerry Garcia, a man whose career spans far beyond the Grateful Dead, spilling into various genres and countless collaborations.” says Amy Reitnouer, executive director of BGS (The Bluegrass Situation) and producer of the event. “Jerry’s life and music still resonates with the people who knew him best, and the multiple generations of artists directly influenced by his art. We could not be more excited to bring those people together to celebrate his legacy.” 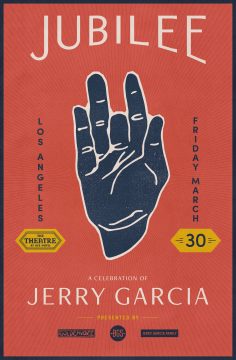