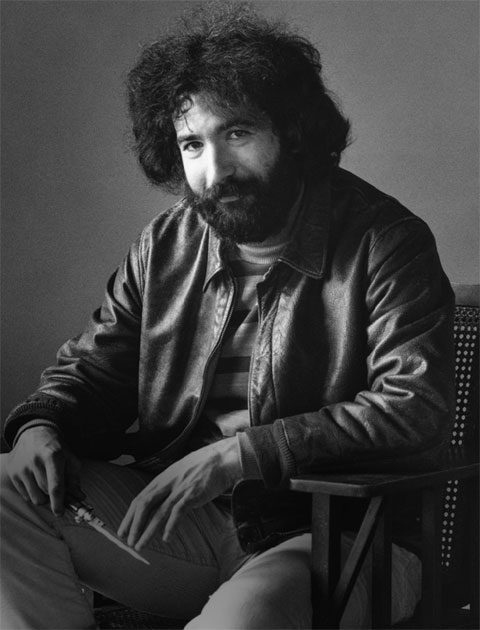 It's probably one of those Joseph Campbell questions, why we need ritual. We need magic and bliss, and power and myth, and celebration and religion in our lives and music is a good way to encapsulate a lot of it.

SPRING A wood chopping accident with his older brother at the Garcia family cabin causes Jerry to lose much of the middle finger on his right hand at the age of five.

WINTER Jerry's father drowns while on a fishing trip.

Jerry and Tiff move in with their maternal grandparents for a five-year stint. Jerry attends Monroe Elementary School, and is greatly encouraged in his artistic abilities by his third grade teacher. Through her, he discovers that being a creative person is a viable possibility in life. It is during this time that Jerry picks up the five-string banjo. 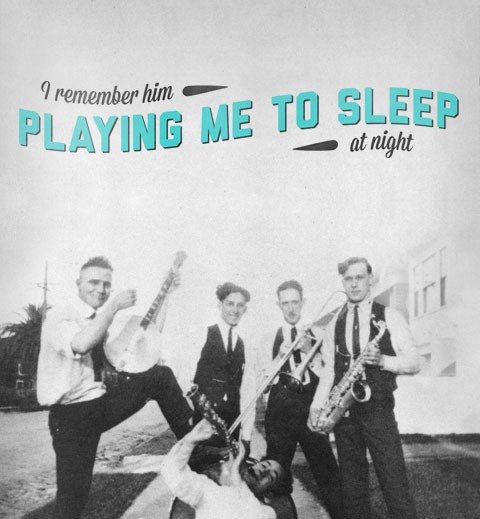 "My father played woodwinds, clarinet mainly. He was a jazz musician.

I just barely remember the sound of it. But I'm named after Jerome Kern, that's how seriously the bug bit my father."

Garcia is introduced to early rock & roll and rhythm & blues by his brother. He is inspired by Ray Charles, John Lee Hooker, B. B. King, Hank Ballard, and Chuck Berry.

AUGUST 1 On his fifteenth birthday, Jerry receives an accordion. Disappointed, he complains until the instrument is exchanged for an electric guitar and amplifier, and his stepfather soon introduces him to an open-tuning style.

APRIL Hoping to see the world, Jerry enlists in the US Army at age seventeen, and completes basic combat training at Fort Ord near Monterey on the Pacific Coast.

DECEMBER Jerry is discharged from the Army only months after joining, on the basis of “lack of suitability to the military lifestyle.”

MARCH-MAY Jerry meets Bob Hunter at Commedia Theater in Palo Alto, they play their only two paying gigs together as Bob & Jerry, earning ten dollars for the shows.

FEBRUARY 20 Jerry narrowly survives a major car accident which changes his focus. He later cites it as a “slingshot for the rest of [his] life.” This revelation causes him to choose the guitar over his hobby of painting and drawing. 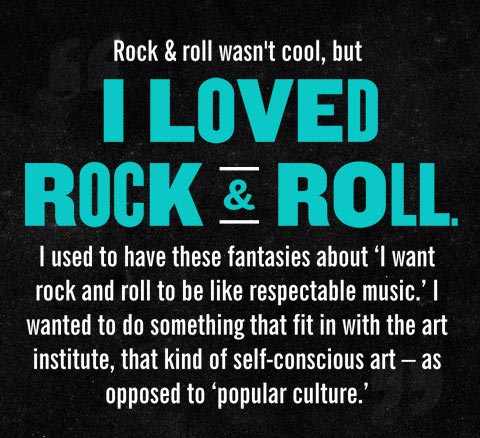 SPRING Jerry and Phil Lesh meet during a party in Menlo Park. Phil later suggests recording one of Jerry’s performances to broadcast on local radio station KPFA. The recordings lead to a ninety-minute special broadcast as “The Long Black Veil and Other Ballads: An Evening with Jerry Garcia.”

DECEMBER 31 Bob Weir meets and jams with Jerry at Dana Morgan's music store when Jerry's student doesn't show up for a lesson. 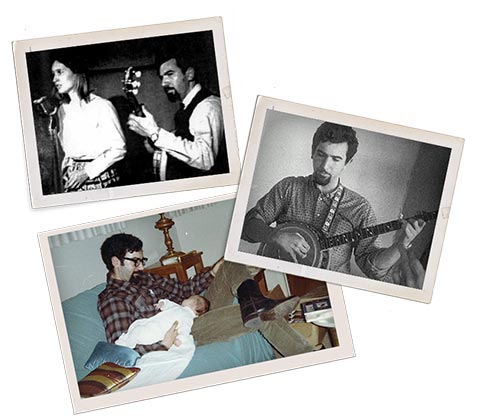 Jerry joins the Zodiacs formed by Bill Kreutzmann, featuring Pigpen on harmonica, Garcia on bass, and Troy Weidenheimer on guitar.

DECEMBER 8 Daughter, Heather, is born to Jerry and Sara.

MAY 5 Phil Lesh and Bill Kreutzmann join Jerry, Pigpen, and Bob to perform their first gig as The Warlocks at Magoo’s Pizza in Menlo Park, CA.

DECEMBER 4 The Warlocks change their name to Grateful Dead, and perform their first of many shows as the house band at a Ken Kesey Acid Test in San Jose, CA. 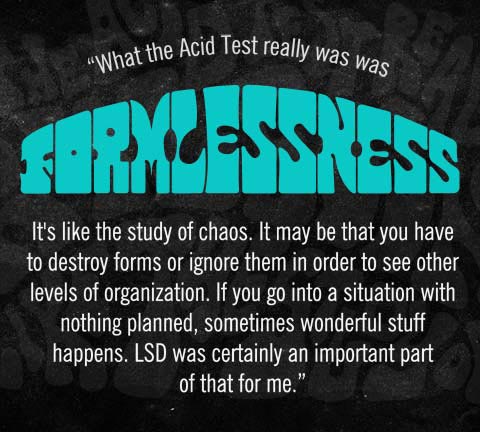 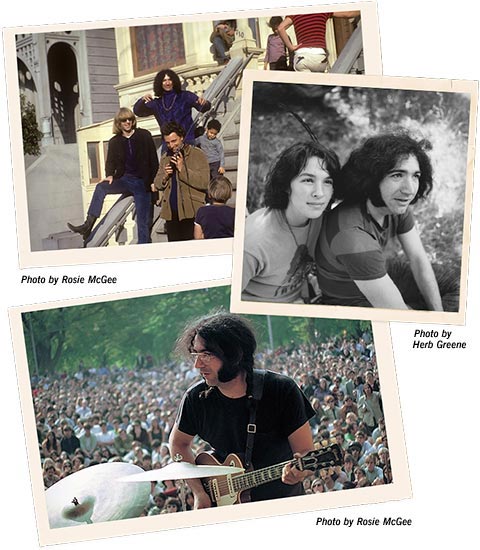 OCTOBER Jerry and the rest of the band move into a communal house situated at 710 Ashbury Street. It becomes a fixture on the local music scene—providing a venue for many free concerts throughout the year-and-a-half they live there. This leads to the Grateful Dead performing more free concerts than any other band in history.

DECEMBER Jerry starts dating Carolyn Adams, also known as Mountain Girl, after she breaks off her marriage with George Walker, a member of the Merry Pranksters.

SEPTEMBER Mickey is introduced to Jerry through Bill Kreutzmann, and joins the band—rounding out the cornerstone lineup.

OCTOBER Jerry delegates the task of firing Pigpen and Bob to Rock Scully, and the remaining members do a number of shows under the name Mickey and the Hartbeats—mainly playing Grateful Dead songs without lyrics. Both members eventually rejoin the Grateful Dead, and the band is able to survive.

MAY Jerry enters his "pedal steel flirtation period," according to Bob Weir, which continues through to 1974. During this time he records one of the best known steel solos on Crosby, Stills, & Nash's "Teach Your Children."

AUGUST 7 Jerry, along with David Nelson, John “Marmaduke” Dawson, Bob Matthews, and Mickey Hart perform their first show as New Riders of the Purple Sage. Jerry continues as an official member of the band until November 1971. The band frequently opens for the Grateful Dead during this period.

AUGUST 23 Jerry appears on the cover of Rolling Stone Magazine for the first of twelve total covers. 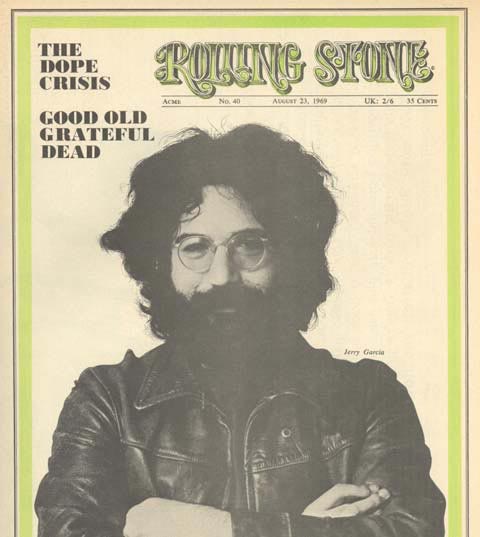 SEPTEMBER 28 Jerry's mother dies due to complications from a car accident in San Francisco.

MARCH 2 Jerry, John Kahn, David Grisman, Peter Rowan, and Richard Greene perform for the first time as Old & in the Way at the Record Plant in Sausalito, CA. Vassar Clements would later replace Greene on fiddle.

AUGUST 5 Jerry performs under the name Jerry Garcia Band for the first time, alongside John Kahn, Nicky Hopkins, and Ron Tutt at Keystone in Berkeley, CA.

NOVEMBER 5 Jerry appears in the movie Close Encounters of the Third Kind as an extra during the crowd scenes in India. During the following year, the Grateful Dead would occasionally improvise the theme from Close Encounters in concert. 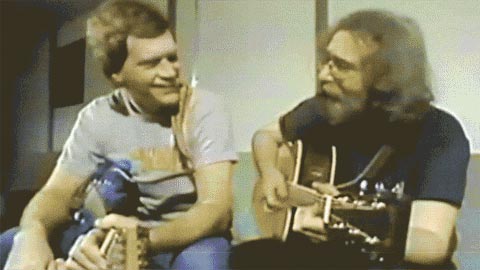 JANUARY Jerry's decade-long heroin addiction culminates in the rest of the Grateful Dead holding an intervention. Given the choice between the band or the drugs, Jerry agrees to check into a rehabilitation center in Oakland, CA.

JANUARY 18 Before the start of his program in Oakland, Jerry is arrested for drug possession in Golden Gate Park; Garcia subsequently attends a drug diversion program.

JULY 10 Jerry lapses into a near-fatal diabetic coma for five days, after which he has to relearn the guitar.

DECEMBER 15 The Grateful Dead return to performing five months after Jerry emerges from his coma. 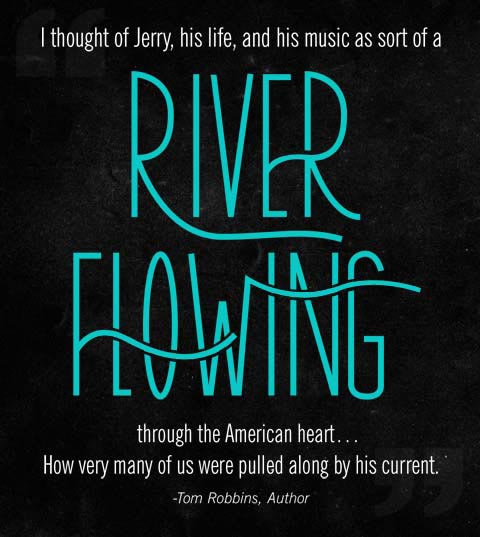 MARCH 17 The Jerry Garcia Acoustic Band makes their first public appearance at The Fillmore during a benefit concert for Artist Rights Today.

DECEMBER 17 Jerry and David Grisman perform together for the first time publicly at Sweetwater in Mill Valley, CA.

JANUARY 19 The Grateful Dead is inducted into the Rock and Roll Hall of Fame. 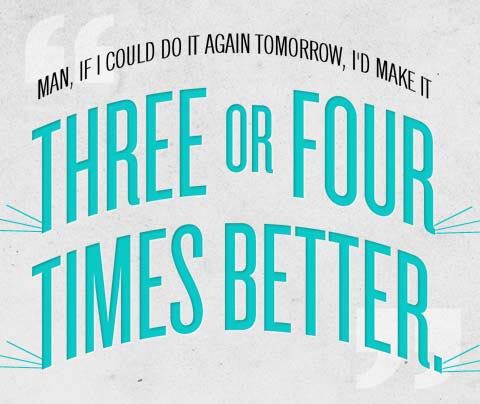 AUGUST 13 Jerry is celebrated by twenty-five thousand family and friends at a public memorial in Golden Gate Park. Memorials span the nation as people all over mourn his passing. 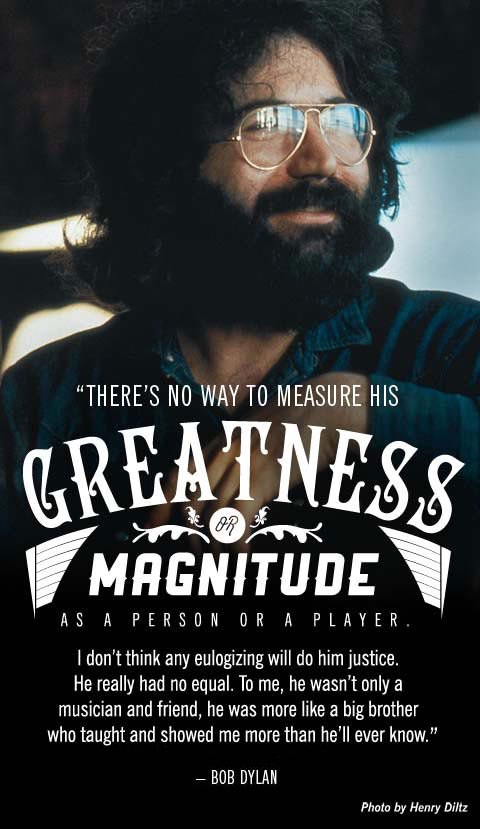