Jerry on Jerry: The Unpublished Jerry Garcia Interviews To Be Published This Fall

Jerry on Jerry, an unparalleled collection of candid interviews with Jerry Garcia conducted by Dennis McNally, is due to be released this November by J.P. Leventhal, publisher of Black Dog & Leventhal, an imprint of Hachette Books. The book will be available in hardcover, eBook and a special audio edition from Hachette Audio, featuring more than eight hours of the original audio recordings covering Jerry’s thoughts on religion, politics, his personal life, and his creative process. Trixie Garcia will provide a personal foreword to the book.

Edited by former Grateful Dead publicist and the band’s authorized biographer, Dennis McNally, and curated with the cooperation of the Jerry Garcia Family estate, Jerry on Jerry will mark the first time these insightful and intimate interviews with Jerry Garcia have ever been made available to the public. Jerry speaks openly about everything from growing up in the San Francisco Bay Area and his first encounters with early R&B to his thoughts on songwriting, LSD, the Beats and Neal Cassady, government, movies, and much more.

The audiobook edition will allow fans the intimate experience of listening in on hours of candid conversations spanning decades and a variety of topics. These archival recordings perfectly capture Jerry’s warm presence, sly wit, and unforgettable laugh, and are further enhanced by the inclusion of a dozen original, previously unreleased live musical recordings courtesy of the Garcia family. Pre-order Jerry on Jerry via the retailers below: 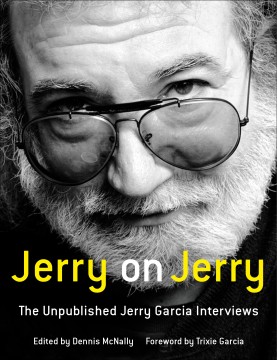