The original members of Grateful Dead — Mickey Hart, Bill Kreutzmann, Phil Lesh, and Bob Weir — have announced two additional shows at Levi’s Stadium in Santa Clara, California on June 27th and 28th, as part of their “Fare Thee Well: Celebrating 50 Years of Grateful Dead” run. Along with the three shows at Chicago’s Soldier Field on July 3rd, 4th, and 5th, the run will mark the original members’ last-ever performances together. The band will be joined by Trey Anastasio (guitar), Jeff Chimenti (keyboards), and Bruce Hornsby (piano) and perform two sets of music each night.

The band posted a letter to their fans today announcing the shows on Dead50.net. 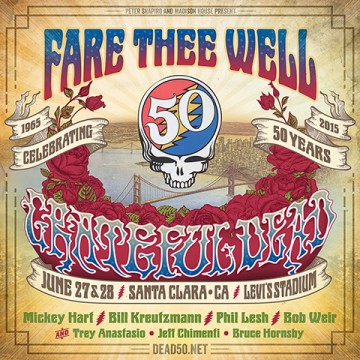