How sweet it is! On November 27th, Round Records and the Jerry Garcia Family are joining Record Store Day’s Black Friday celebration with an exclusive vinyl release of GarciaLive Volume Two: August 5th, 1990  Greek Theatre. Pressed in a limited-edition of 5,000, this set contains four 180g LPs housed in a clamshell box and includes a MP3 download card of the album.

GarciaLive Volume Two captures a very fruitful period for the classic latter-era lineup of the Jerry Garcia Band as it produced two other marvelous albums – Jerry Garcia Band and How Sweet It Is. In the very familiar surroundings of the Greek Theatre in Berkeley, CA, Garcia is joined by longtime comrade John Kahn on bass, Melvin Seals on organ, David Kemper on drums, as well as Jacklyn LaBranch and Gloria Jones on backing vocals. This show also features a guest appearance by acclaimed banjo virtuoso Béla Fleck who joins in on the second set with a scorching “Midnight Moonlight” and an out of this word rendition on the Jimmy Cliff classic, “The Harder They Come.” Other highlights from this sunny August afternoon include a rhythmic “Stop That Train,” an energetic delivery of “My Sisters and Brothers,” and a crowd-pleasing send off with the Dylan penned favorite “Tangled Up in Blue.”

For more information on Record Store Day and a list of local, independent record stores where the release will be available, visit RecordStoreDay.com.

SIDE B
Forever Young
Run for the Roses

SIDE D
Tears of Rage
Deal

SIDE F
And It Stoned Me
Waiting for a Miracle

SIDE H
That Lucky Old Sun
Tangled Up in Blue 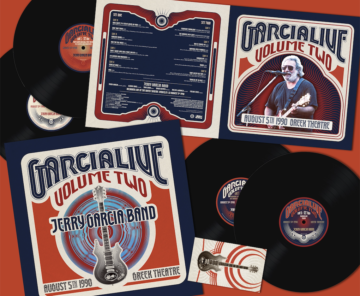