GarciaLive returns with a new installment due for release on August 19th! GarciaLive Volume Seven showcases the Jerry Garcia Band’s November 8th, 1976 performance at Sophie’s in Palo Alto, California. Recorded by Betty Cantor-Jackson, the original master reels were only recently re-discovered, along with a few other reels dubbed the “Houseboat Tapes”, and have been remastered for this release. It was the year of this recording that Donna Jean and Keith Godchaux first joined up with the Jerry Garcia Band. Their addition, along with Ron Tutt on drums and bassist John Kahn, helped form what would be one of the most durable lineups of the Garcia Band. In fact, earlier that year Garcia commented “I haven’t been as happy with any little performing group since Old And In The Way in terms of feeling ‘this is really harmonious, this is what I want to hear.’”

That harmonious vibe is especially present on this recording as well. Throughout the course of the evening, the band deftly melds gospel, rock, soul, and reggae to form their quintessential mid-70’s sound. As one astute critic pointed out, “More than any other Garcia band this one allows him room to run through all his guitar styles, often within a single song.” From the opening notes of “The Way You Do The Things You Do”, the band lock into a relaxed, but confident groove with Kahn & Tutt’s deep pocket providing the foundation for Jerry & Keith’s melodic exploration and rounded out by Donna Jean’s soulful harmonies. The Hunter/Garcia penned “Mission in the Rain” and Dylan’s “Knockin’ on Heaven’s Door” are particularly poignant and soulful while songs like Peter Rowan’s “Midnight Moonlight” and Hank Ballard’s “Tore Up Over You” provide the sparks bringing balance to the evening. A 22+ minute “Don’t Let Go” stands out not only for its length, but for its exercise in dynamics which further showcases Garcia’s comfort not only with the band, but the freedom found in playing smaller rooms tailor-made for they type of music he was looking to create.

GarciaLive Volume Seven: November 8th, 1976 Sophie’s Palo Alto is now available for pre-order at Garcia Family Provisions in advance of it’s August 19th release date. The 3-CD set or digital downloads are available on their own or bundled with an exclusive t-shirt and/or a limited edition 16″x24” screen print by Half Hazard Press signed and numbered by the artist in an edition of 500. 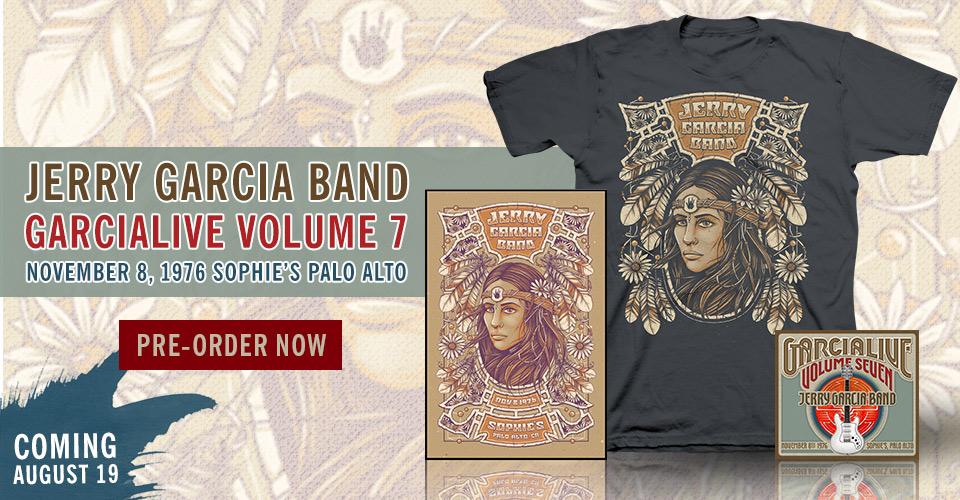