GarciaLive Volume Eight presents the Jerry Garcia Band’s November 23rd, 1991 performance at the Bradley Center in Milwaukee, WI. The fall ’91 tour as a whole is widely regarded as one of Garcia’s finest and this particular Saturday evening serves as a further testament to the legend. Fans in attendance at the Bradley Center braved an intense snowstorm and the audience’s palpable energy and enthusiasm was a likely catalyst for this spirited performance. Keyboardist Melvin Seals summarized the group nicely stating “That was the magic band. It’s not that the other scenarios didn’t work out but once we got to that level of the band with (drummer) Dave Kemper, John Kahn, Jerry, myself and the singers, Jackie (LaBranch) and Gloria (Jones) we all knew we had something special. That was the band.”

And magic they made! As Dean Budnick notes in the release’s liner note essay, “If at times the Grateful Dead could be something of a turgid Russian novel: convoluted and labyrinthine yet mostly rewarding, the Jerry Garcia Band during this era was more of an Elizabethan sonnet: breezy, emotive and luminous.” The tone is set immediately with a melodious “Cats Under The Stars” opening the evening to the sheer delight of the crowd. Playful and buoyant versions of “Lay Down Sally”, “Ain’t No Bread in the Breadbox”, and “Deal”, along with an incendiary “Tangled Up In Blue” build into peak after peak. The marvelous evening is balanced by soul-soaked performances of “That Lucky Old Sun”, “My Sisters and Brothers” and a positively show-stopping take on The Manhattan’s “Shining Star” which showcases Jerry and the girls singing in beautiful harmony.  As the Garcia Band graduated into arenas it could be expected that some of the intimacy might be lost, but on this cold, snowy evening in Milwaukee, they managed to make the Bradley Center feel cozy and warm.

GarciaLive Volume Eight: November 23rd, 1991 Bradley Center is now available for pre-order at Garcia Family Provisions in advance of its March 10th release date. The 2-CD set or digital download is available on its own or bundled with an exclusive organic t-shirt and/or a limited edition 18″x24″ screen print by Pete Schaw signed and numbered by the artist in an edition of 500.

1.) Cats Under The Stars

2.) They Love Each Other

4.) The Night They Drove Old Dixie Down

7.) My Sisters and Brothers

1.) Bright Side of the Road

2.) Waiting for a Miracle

5.) Ain’t No Bread in the Breadbox 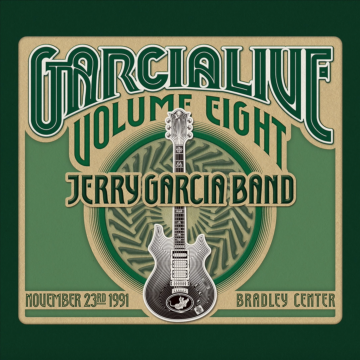