The GarciaLive series is set to return with our first dip into the acoustic realm! GarciaLive Volume 14: January 27th, 1986 The Ritz spotlights an exultant Jerry Garcia & John Kahn acoustic duo performance in the heart of New York City. The newest installment in the series will be released on July 24th as a single CD, digital download, and available via streaming services. A 2-LP version pressed to 180g vinyl in a limited edition of 5,000 will also be made available on August 14th. The collection includes a liner note essay by bluegrass virtuoso Billy Strings. While supplies last, fans purchasing GarciaLive Vol. 14 on CD via Garcia Family Provisions or their local, independent record shop will also receive a bonus CD featuring Garcia & Kahn’s complete January 28th, 1986 performance at The Ritz. Pre-order here.

There was always palpable energy to Garcia’s performances in the Big Apple and this Monday night was no exception. Captured at the mid-way point in their East Coast run, Garcia & Kahn delight a spellbound audience with a mix of Grateful Dead favorites, folk standards, and other staples from Garcia’s songbook. The duo’s performance is laid-back yet impassioned with Garcia’s mastery as a storyteller on full display. As BillyStrings describes in the liner notes, Garcia “sings through the verses and picks through the melodies as if he is the man in the story. Delicate and deliberate.” A sultry version of “Friend of the Devil” showcases Garcia’s soulful singing and his deep musical connection with Kahn. And what Garcia performance would be complete without a couple nods to the Bard — “When I Paint My Masterpiece” and “Simple Twist of Fate.” Other highlights include an upbeat “Bird Song” which Garcia & Kahn stretch out for the longest jam of the evening and a joyous “Ripple” we imagine made the whole room smile.

GarciaLive Volume 14: January 27th, 1986 The Ritz is now available for pre-order at Garcia Family Provisions in advance of its July 24th (CD/Digital) & August 14th (LP) release. The CD, 2-LP set, or digital downloads can be pre-ordered on their own or bundled with an exclusive 100% organic cotton t-shirt and/or a limited edition 18″ x 24″ screen print designed, signed, & numbered by artist Luke Martin/Suburban Avenger. 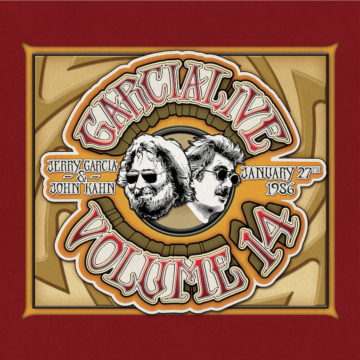