We’re returning to the fertile grounds of Northern California for the next installment in the GarciaLive series. GarciaLive Volume 17: NorCal ’76 will present highlights from three* stand-out Jerry Garcia Band performances captured over the span of a week — November 7th at the Keystone in Berkeley; November 12th at the University of California, Davis; and November 13th at Humboldt State University in Arcata. While a myriad of challenges from reel damage to tape loss and other assorted technical difficulties spoil any opportunity to feature the complete performances, what remains of Betty Cantor-Jackson’s original recordings offers some of the finest performances from this iteration of the Jerry Garcia Band.

1976 marked a period of transition for Garcia. Having eschewed the jazz and funk explorations of the early ‘70s in favor of a more “traditional” rock & roll vibe with Nicky Hopkins, Garcia welcomed his Grateful Dead bandmates Keith & Donna Jean Godchaux into the fold towards the top of the year likely delivered Garcia a sense of comfort aided by mainstays John Kahn and Ron Tutt rounding out the ensemble. While the band could still light it up with the best of them, as evidenced here by blistering versions of “Mystery Train,” “After Midnight,” and the almost obligatory closer “Mighty High,” tempos often eased to a swamp blues feel while the group pursued more sweet, introspective territory. A review of the Davis performance described the evening as “mellifluous” and continued, “never before have I seen Garcia dance, nor have I ever seen him smile so much.” Look no further than vibrant versions of “How Sweet It Is (To Be Loved By You)” “Stir It Up,” and “The Way You Do The Things You Do” for evidence of bliss. The sweetness is balanced by more pensive selections including poignant versions of “Catfish John,” bolstered by sublime harmonies from Donna Jean, and Irving Berlin’s “Russian Lullaby.” Perhaps no performance better demonstrates the JGB’s power than the opening “Sugaree” which showcases Garcia’s fiery leads and impassioned vocal, Keith’s brilliant, understated accompaniment, and Kahn & Tutt’s deep pocket groove. It’s enough to put a smile on anyone’s face while giving you a few things to ponder at the same time.GarciaLive Volume 17: NorCal ‘76 is now available for pre-order at Garcia Family Provisions in advance of its November 12th release. The 3-CD set or digital download, which includes an essay by long-time Grateful Dead crew member and Jerry Garcia Band manager Steve Parish, can be pre-ordered on its own or bundled with an exclusive 100% organic cotton t-shirt and/or a limited edition 18″ x 24″ screen-print designed, signed & numbered in an edition of 750 by Robbie Simon. *Caveat: “Mighty High” comes from an undated recording we suspect was made around this time. 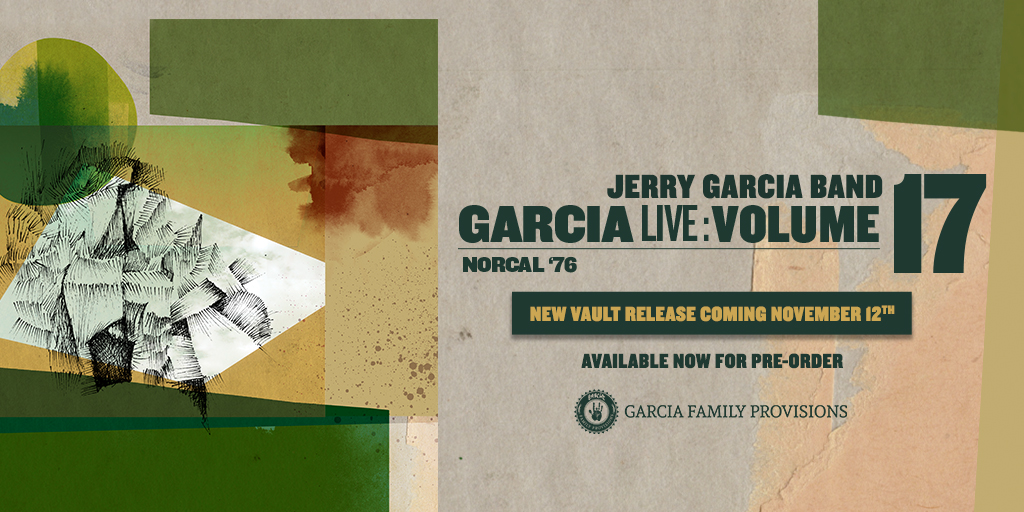