On April 18th, Round Records and the Jerry Garcia Family will join the celebration of independent record stores with an exclusive re-issue of Garcia (Compliments), Jerry’s second full length solo studio album.  Garcia (Compliments) will be pressed in a limited edition of 180gram green vinyl by Quality Record Pressings in Salina, Kansas and will feature an individually numbered foil-stamped jacket.  The Garcia (Compliments) vinyl was remastered for vinyl release by Joe Gastwirt with lacquers cut by Kevin Gray.

Originally released in 1974, the album was simply titled Garcia.  To distinguish this release from the eponymous debut, Garcia (Compliments) takes its revised name from a “Compliments of” sticker which appeared on promotional copies of the album.  The album was produced by long-time collaborator John Kahn and peaked at #49 on the Billboard charts upon initial release.  Kahn selected the compositions featured on the release with the exception of “Russian Lullaby,” which was selected by Garcia.  When asked about the selections, Garcia noted:  “John and I share such similarities of taste, something that I like John is almost sure to like it. We’re very like each other musically. That’s one of the reasons I’ve been playing with him all this time.”  In addition to a track list that boasts classics from artists like Chuck Berry, Smokey Robinson, and Peter Rowan, Garcia (Compliments) also boasts an all-star cast of the 1970’s most in-demand session players.  Joining Garcia & Kahn are drummer Ron Tutt (Elvis), guitarist Larry Carlton (Steely Dan, Joni Mitchell, Fourplay), organist Merl Saunders, and legendary backing vocalists Merry Clayton, and Clydie King, among other notable musicians. 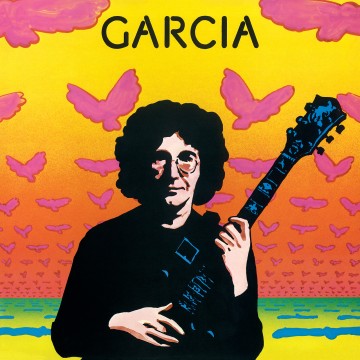 Side A:
1. Let It Rock (Chuck Berry)
2. When The Hunter Gets Captured By The Game (Smokey Robinson)
3. That’s What Love Will Make You Do (Little Milton)
4. Russian Lullaby (Irving Berlin)
5. Turn On The Bright Lights (Albert Washington)

Side B:
1. He Ain’t Give You None (Van Morrison)
2. What Goes Around (Dr. John)
3. Let’s Spend The Night Together (Mick Jagger/Keith Richards)
4. Mississippi Moon (Peter Rowan)
5. Midnight Town (John Kahn/Robert Hunter)