On October 14, 2016, Dear Jerry: Celebrating The Music of Jerry Garcia, created and produced by Blackbird Presents and the Jerry Garcia Family, will be released worldwide by Rounder in multiple formats, including Blu-ray, DVD, CD and digital download. Blu-ray, DVD, CD and combo packs are available for pre-order starting today at: amazon.com, jerrygarcia.com and dearjerryconcert.com.

On May 14, 2015, a remarkable array of musical artists from rock, folk, R&B, reggae, bluegrass, and country converged on Merriweather Post Pavilion in Columbia, Maryland for a once-in-a-lifetime concert event taping to pay tribute to the enduring musical and cultural legacy of the late Jerry Garcia, one of the most influential and beloved musicians of the modern era.

Captured and presented in stunning HD with true Dolby 5.1 surround stereo, the concert film and audio recordings include some of Garcia’s most beloved songs, including “Touch of Grey,” “Friend of The Devil,” “Sugaree,” “Uncle John’s Band,” “St. Stephen,” “The Wheel,” and many more.

Get Out Of My Life Woman – Allen Toussaint 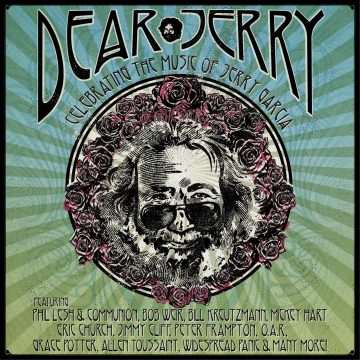