Introducing “Built To Last”, the fourth and final print in our portrait series with acclaimed artist Chuck Sperry. A limited edition run of 500 prints will be released at GarciaFamilyProvisions.com between 2pm EST and 5pm EST on Tuesday, November 21st. As with prior releases, prints will be restricted to 1 print per fan/household. Subscribe to the Jerry Garcia Newsletter at JerryGarcia.com to be among the first to receive notice when the prints are released.

“My fourth and final print in my portrait series, “Jerry Garcia (Winter)”, seeks to capture the wisdom and compassion of the Grateful Dead’s lead guitarist. Jerry anchored the concert hall with his good nature, while a wild, free improvisation swirled through him and around him. I wove a psychedelic paisley pattern throughout the design – and running through the iconic black t-shirt area as a matte and glaze black effect – rendered in nine colors, including bright hues, hand-blended metallics and translucent glazes. My aim is to portray the evolved Jerry, the enlightened artist who radiated peace, wisdom and compassion, and made music that was “Built to Last” – Chuck Sperry 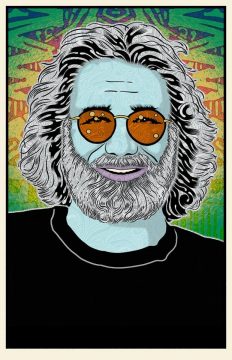