Jerry Garcia was devoted to the exploration and performance of music and was not known for taking public positions on issues. But, in September 1988, he and the Grateful Dead felt compelled to step up for the Earth’s rainforests. They organized the Rainforest Benefit Concert at Madison Square Garden with the hope that they would motivate their audience and the world to act.

“In 1988, my father and the Dead held a benefit concert to save the rainforests and to protect our environment when no one else thought it was important. It’s unimaginable that we’re still fighting this fight today, but we are pleased to partner with KEEN to help protect the Tongass,” says Trixie Garcia.

The concert will raise donations and fan petitions to support The Wilderness Society’s campaign to Protect the Tongass National Forest from imminent destruction due to a recent decision to open it up to logging and other industrial development. As the largest temperate rainforest on Earth and located in the panhandle of Alaska, this “climate sanctuary” is home to numerous Alaska Native communities, is critical wildlife habitat, and absorbs a globally significant amount of carbon.

Watch live starting at 8 pm ET on Thursday, April 22nd on the KEEN Facebook page or at Fans.Live, and check out the special KEEN x Garcia 4/20 product auction at biddingforgood.com/KEEN, with 100% of proceeds supporting the Tongass for the sake of our climate, Indigenous communities, and critical wildlife habitat. 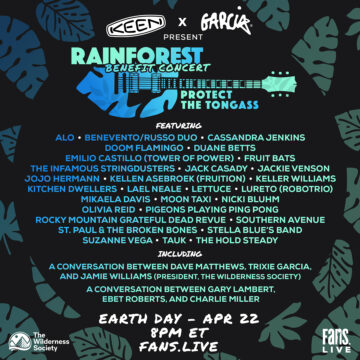