Located between Boston and New York City, where the Grateful Dead packed legendary arenas such as The Boston Garden and Madison Square Garden with epic multi-night runs for decades, Providence held a special place with the Dead, and the Jerry Garcia Band, as they seemed to perform at a consistently high level each time. From 1971 – 1987, the Grateful Dead played 20 shows there, 19 of them at the Providence Civic Center. Following 1987, the Dead’s commercial success created unexpected challenges that made it difficult to return to the small New England city again. While they didn’t experience the same challenges, the Jerry Garcia Band didn’t play Providence again until 1991, when they returned for their biggest arena tour to date.

The success of the 1991 show set the stage for the highly-anticipated 1993 return. Recorded on 11/11, this 11th volume in the acclaimed GarciaLive archival series does not disappoint. Kicking things off with two signature Garcia/Hunter JGB classics “Cats Under The Stars” and “Mission In The Rain”, the group set the tone for what would be a stellar set, with a few surprises. During the fall 1991 tour, the Jerry Garcia Band introduced Norton Buffalo’s soulful “Ain’t No Bread In The Breadbox” into the repertoire and they broke out a highly-spirited version on this night. The second set opens with a jubilant rendition of “The Way You Do The Things You Do” followed by the rarely performed Van Morrison song “He Ain’t Give You None” which appeared on Morrison’s debut album in 1967. The Beatles’ “Dear Prudence” receives a shorter Jerry Garcia Band treatment before rolling seamlessly into Smokey Robinson’s “When The Hunter Gets Captured By The Game”, made famous by The Marvellettes in 1967. The JGB only performed the song 13 times in two plus decades. The epic, 13-minute rendition of  “Don’t Let Go” sees the group take the song to the stratosphere for a while before returning for a smooth landing to close the second set. The encore features an electrified bluegrass version of Peter Rowan’s “Midnight Moonlight,” which Garcia originally played with Rowan as part of the highly influential bluegrass ensemble Old & In The Way on their self-titled 1975 album.

While no one knew this would be Jerry Garcia’s last performance in Providence, there is a poetic beauty that the last song he played there would be a song inspired by the folk and bluegrass foundation from which he began his career in the early 1960’s. Looking back, it seems that everything came full circle.

GarciaLive Volume 11: November 11th, 1993 Providence Civic Center is now available for pre-order at Garcia Family Provisions in advance of its July 12th release date. The 2-CD set, or digital downloads are available on their own or bundled with an exclusive t-shirt and/or limited-edition screen spring by Ivan Minsloff signed and numbered by the artist in an edition of 500.

Track List:
Disc One // Set One
1. Cats Under the Stars
2. Mission in the Rain
3. That’s What Love Will Make You Do
4. Simple Twist Of Fate
5. Ain’t No Bread In The Breadbox
6. My Sisters And Brothers
7. Deal 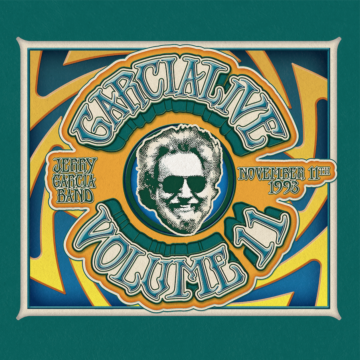