All The Years Combine: Day Five – Jerry in Cairo, 1978 by Adrian Boot

All The Years Combine: Celebrating Jerry Garcia in Picture keeps on truckin’ into its fifth day with this iconic image of Jerry Garcia at the pyramids in Cairo captured by photographer Adrian Boot while on assignment covering the Grateful Dead’s 1978 performances in Egypt.  Adrian shares his memories of this momentous occasion below: 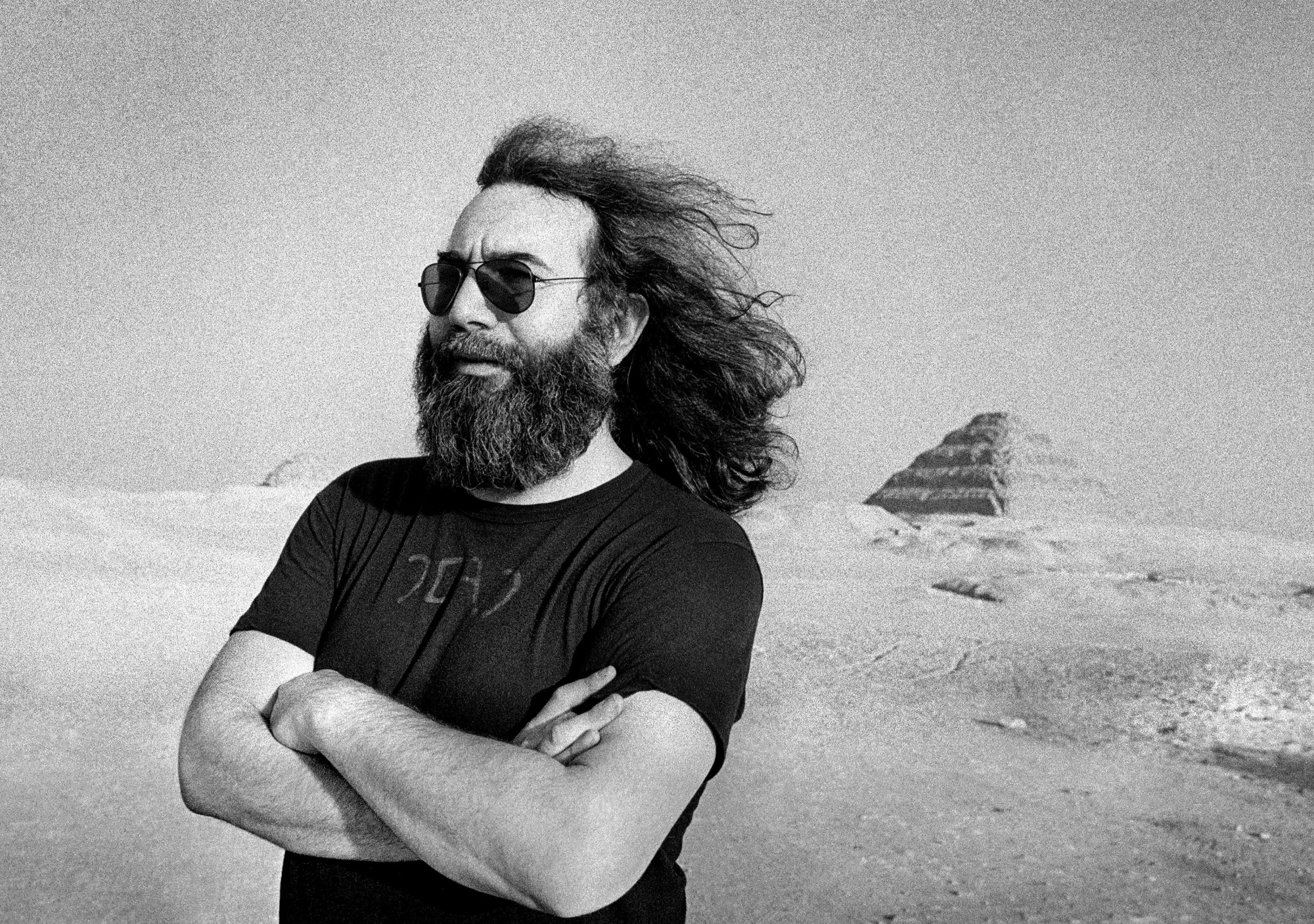 The Grateful Dead are in Egypt for three concerts at Cairo’s new Sound & Light Theatre, with its spectacular backdrop of the Giza Necropolis, the great Cheops pyramid and the Sphinx. The bill includes special guests, the local musician Hamza el Din and a host of Nubian drummers. The audience is a plane-load of Dead heads, a gathering of bemused locals and a posse authentic desert Bedouins along with their tents, goats, horses and camels. I am here to photograph the event for the UK music press, my paymaster their record company, keen to promote the Grateful Dead’s autumn UK and European tour.

These days the idea of a rock band performing in Egypt holds far less cache than it did in 1978. It was an inspired notion, no doubt sparked during some stoned band gathering, that set the ball rolling, stirring the Grateful Dead machine to open diplomatic talks between the US Government and Egyptian officials to permit the band to bring their acid trip to Cairo. Considering the precarious political state of the world at the time, it is a minor miracle that they were ever granted visas let alone allowed to play three concerts, harness the energy of the ancient dead, coordinate a Lunar eclipse and levitate a pyramid.

As the production evolved in the days preceding the event, it became clear that the Grateful Dead would be canceling the UK concerts and European tour. Frantic long distance appeals from promoter Harvey Goldsmith’s office to Jerry Garcia were in vain. In those days telephone calls between Cairo and London were erratic and expensive. I spent many hours with a small band of journalists hanging out in the Mena House hotel bar waiting for the next call, the next episode, as our livelihoods depended on it. But the Dead’s energy and resources had already been sacrificed to a much more important project, this the ultimate acid test.

Over the next week I would travel with Jerry Garcia to the tombs of Sakkara and the ancient city of Memphis, wander around the pyramids with Bob Weir, bump into Ken Kesey, reputedly the source of a specially procured liquid “Owsley”, while cheering Mountain Girl and her horse racing against the local Bedouin. I followed bundles of cables towards and into the Great Pyramid where, deep inside the King’s Chamber, off duty promoter Bill Graham offered the production crew technical advice. The first night’s performance had overloaded the local power grid and the locals were upset but the Dead’s production crew were having none of it, orders were orders, and the bowels of the Pyramid were crucial to the enterprise. This elaborate complex of audio equipment set up at the centre of the pyramid would provide the echo FX for the concerts, especially on the big night, eclipse night, when this tomb-embedded technology was due to assist the ancient gods with the task of levitating the Pyramid on cue.

The big day was the 16th, the final concert, the much-anticipated finale enhanced with spectacular astronomical and anti-gravity effects. This miraculous final show climaxed at the precise moment of a total lunar eclipse, with the bonus synchronicity of the signing of a historic peace treaty between Egypt and Israel.

After the show Bill Graham leads a posse of hyper excited Dead heads, camels and horses deep into the desert night towards a remote shanty nightclub called Sahara City for an after show feast and spectacular desert dawn. Shortly after sunrise, with the party still simmering, I left this surreal setting to catch a more conventional taxi ride to the airport and a grey, damp, punk-infested London. Passing the great Jerry Garcia I thanked him for his inspiration and hospitality. “I was a little disappointed that the Pyramids didn’t levitate,” I said.  “You weren’t paying attention,” he replied. – Adrian Boot